From AIOWiki
Jump to navigation Jump to search
Nick Mulligan 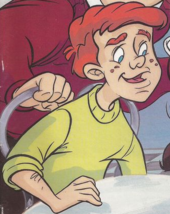 Nick Mulligan considered himself 'an undiscovered star' and occasionally went into a fantasy about being a rock star. He was part of a garage band called 10W40. He played the tambourine and was also learning the guitar in #473: “Breaking Point”.

Nick used to live in New York, but he got into some trouble and was taken in by his uncle, Mike Mulligan. He then went to live with the Mulligans and worked at Whit's End. Although he did not become saved on the audio show, he became a Christian in a Clubhouse Magazine. Nick seemed to have a sense of honor and chivalry as he considered Rodney Rathbone a bully and loser and even confronted him about it. He has made Rodney back off as he has defended both Nathaniel Graham and Grady McKay before. Nick is known to have curly blonde hair and 5'8" tall. During his time on the show, he was probably about 15 years old.

Little is known about Nick's immediate family. The Mulligans became his family when he was taken in by them. Tracy and Mike Mulligan are his adoptive guardians. His adoptive siblings are Lisa, Janelle, Jessica, Hector, Tony, and Brianna.

Nick Mulligan has appeared in the following albums:

Nick Mulligan has appeared in the following club seasons: