From AIOWiki
Jump to navigation Jump to search
Album 74: Buckle Up!
Front   Art 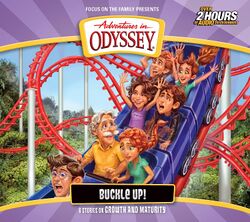 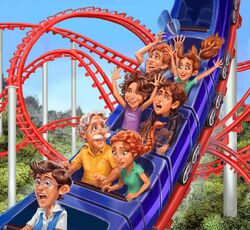 Buckle Up! is the 74th Adventures in Odyssey mainstream album. It will be released on March 7, 2023.

To this point Renee and Horus have only appeared in club adventures, not anymore. In Album 74, both are back for a scientific breakthrough of monumental proportions. But there’s a catch: the technology is based on Mr. Whittaker’s Imagination Station – and he didn’t give them permission to use it! Will Renee risk her friendship with Whit for the name of science?

Olivia’s spiritual journey continues. When she gives her testimony at church, big questions arise that she can’t answer. How will she handle it? Can she take the next step while still reflecting God’s love?

Elsewhere in town, friendships are at stake when Buck and Jules hit a rough patch that could endanger theirs. Meanwhile, Morrie and Suzu try to find a healthy path toward making new friends. And Wooton faces a courtroom struggle that pits him against an old friend.

The folks in Odyssey are about to face all sorts of twists and turns. So mark your calendar for December 15. Then keep your hands and arms inside the car at all times… and Buckle Up!