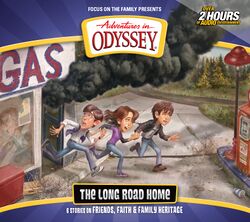 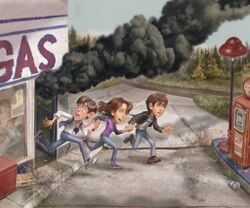 The Long Road Home is the 72nd Adventures in Odyssey mainstream album. It was released in 2022. Its episodes began airing on the radio starting on December 4, 2021 and finished on April 2, 2022.

“Have you ever considered that Mr. John Avery Whittaker has his own agenda?” Olivia has a new friend in her life. He’s smart, interesting, and just so talkative. Will his influence, and Olivia’s own desire to settle some scores, ruin her friendships with Zoe and the gang at Whit’s End? Will his devious comments convince Olivia to abandon her faith?

Meanwhile, Buck and Jules discover that Buck’s father left behind a lot more than could ever have been suspected. Could the map help him determine what is next for his life? Because he’s beginning to wonder if he really wants to be in a family with Eugene and Katrina. Elsewhere in Odyssey, Bridget Perkins learns a good lesson about judging others when she feels that her own life is under the microscope.