From AIOWiki
Jump to navigation Jump to search
Wellington Bassett 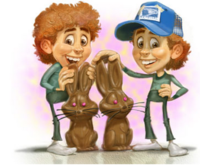 The successful identical twin brother of Wooton Bassett, Wellington Bassett is a booming businessman that is portrayed as the perfect opposite of his brother. While Wooton is kind, caring, albeit a bit childish, and a strong believer, Wellington is depicted as selfish, conniving, wealthy, and a serious non-Christian. He easily and frequently takes advantage of Wooton, as he made Wooton pretend to be him to get some papers signed on time once. He even told Wooton that Wooton was adopted, even though they were identical twins, and he believed Wellington for a year! But even though Wellington tries to take his brother's gullibility for his gain, he usually learns his lesson, whether it be giving up proportions of money or doing the chicken dance in front of a formal audience in the episode #543: “Nothing But the Half Truth”.

Wellington's debut was in #510: “For the Fun of It”, reprimanding his daughter Talia Bassett for reading a book on horse grooming while dining with the ambassadors of Uganda. "Reading literature of any kind is completely inappropriate when dining," he says. So he gives her a choice whether to go to an etiquette school or visit her Uncle Wooton to see how well off she had it. Unbeknownst to his moral comprehension, he is surprised to hear that Talia chooses to visit her uncle.

Later in the same episode, Talia plays a trick on him, fooling him to think that she became just like Wooton by pretending to act exactly like him, take pictures of the incidents, and display them on the Internet for her father to see. He calls to check on her, asking if she has been "wootonized", being relieved when Talia explains that it was a joke. He is not heard of for the remainder of the episode, but is mentioned by Wooton, Talia, and Bradford for a brief time for each.

Wellington returns in #516: “Bassett Hounds”, where he showed up at his grandfather's farewell celebration to get a cut of his money. He was intense on getting a fair share, even suspecting Bernard Walton, who joined Wooton in going for a favor, of being Wooton's agent in getting Wooton his grandfather's larger portion, even threatening the poor window washer. Wellington tried to gain his grandfather's trust to get the fare, bragging about the charities he sponsored and such, but Grandpa Bassett didn't buy it. He later is seen wailing over his loss when Grandpa Bassett tells his family that he gave all of his money to charity.

In #543: “Nothing But the Half Truth”, Wellington asks Wooton to do a favor for him. He wanted Wooton to pretend he was him, so a Mr. Fox Fletcher could sign some important business papers, and it would be perfect because the two were identical twins. Wellington explains that he couldn't be there due to the bad weather where he was at and would not be able to make it. Wooton first objects, saying it would be dishonest. But Wellington keeps on prodding, saying that some of the profits would go to charity and that Wooton wouldn't really lie unless he said he was him. But after Wooton's experience trying to get the papers signed, he finally refused, all the while Wellington finally catches a ride to Connelsville. While trying to convince Mr. Fletcher that he was really Wellington, Fletcher said that Wooton called him and explained the situation. Fletcher let the deal go through anyway, but on two conditions: one was for Wellington to double the charity profits, and for him to do the chicken dance at the ceremonial dinner. Wellington put his foot in his mouth the whole time, but reluctantly agreed. Wellington sure learned his lesson that time!

Wooton tells stories about when Wellington and he were boys, saying that Wellington liked to joke around and have fun. Wooton told Talia and other people about how Wellington used to be the "water-balloon king"; how he threw water balloons at the servants and blame it on Wooton. But now, he has changed dramatically, as all children do. Now, Wellington takes his business stringently. His lust for wealth drives him to the brink of being dishonest and a fat cheat. He frequently takes advantage of Wooton's innocence, and tries to do the same with other people, only to not much success. He is greedy, a hoodwink, stingy, hateful, and a downright contender. He finds people of the Christian faith gullible and ridiculous, as how he treats the people of Odyssey, Grandpa Bassett, and especially Wooton. Alas, his manipulation started young, like how he told Wooton that Wooton was adopted once, and Wooton believed him for a year, even though they were twins. The joking manner in Wellington's youth was not the only concept of his personality during his childhood. All in all, Wellington can be easily described as Wooton's contra.

Wellington has a daughter, Talia Bassett, and is the identical twin of Wooton Bassett. His grandfather is Grandpa Bassett, and has an unnamed grandmother. He has a father and mother, his father being like him, a grumpy gus. He has a bunch of cousins, including Hadley Bassett, as well as several aunts and uncles, most of which do random or unusual stunts.

Wellington owns a car with a built-in cooler, filled with Rootbeer, and two drop-down DVD players.