Trains on the cover of the Adventures in Odyssey album. 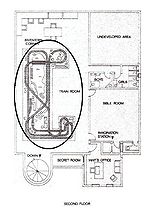 From the Whit's End floor plan.

The Train Room at Whit's End is located on the second floor. It has a large track and at least 6 trains, the oldest of which is Old Number 7 (#11: “Addictions Can Be Habit-Forming”). It is the largest train set in the county.

Unlike the rest of Whit's End, the Train Room went largely unchanged until late 2006 when Whit decided to redecorate with a Western theme — complete with a honky-tonk piano.

The trains are made by Whit and the kids at Whit's End. Some of the specific builders of the train cars have included:

The following people have helped keep the trains running properly: