From AIOWiki
Jump to navigation Jump to search
Buck Oliver 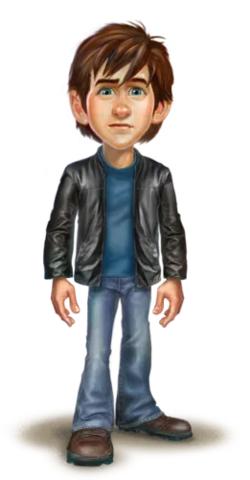 When he first appeared, Buck Oliver was a deceptive yet highly intelligent fourteen-year-old. He had a habit of chewing on toothpicks, but was always told to get rid of them. He had a decent personality and was said to be "handsome", but that was just his outward appearance- he was working with Mr. Skint as part of The Green Ring Conspiracy. As time progressed (in The Green Ring Conspiracy), Buck's shrewd nature began to show, making several Odyssians feel betrayed, yet others (like Katrina Meltsner) believed he had a "good heart" and could change if given the chance. Mr. Skint abandoned him because of his refusal to take Katrina as a hostage. After his time in Juvenile Detention, he seems eager to prove that he has changed for the better. However, he confides in Jules Kendall that sometimes he feels tempted to lie just to see if he can still get away with it. He also admits that he wonders if his life in Odyssey is temporary, and he'll eventually have to go back to the life of a con artist. Still, he expressed a distaste for living a life where you never know "when one lie ends, and another one begins"; never knowing what is real. ( The Long End Parts 2 and 3). Buck seems to have a crush on Jules.

Little is known about his history, except that, after the deaths of his parents (whom he can't remember), he moved around a lot with Mr. Skint, who taught him everything he knew about being a con-artist. It is possible that they went around doing odd jobs for criminals here and there, or they could have worked with the Green Ring the whole time, and went wherever the Carnival and counterfeit money went. Mr. Skint taught him how to pray in case they ever scammed someone who expected them to. At one point, Buck and Mr. Skint stayed at a motel, at the back of which Buck met a boy named Mike Rudy, who he befriended. He helped him and his father build a tree house, but Buck never had the chance to say goodbye before Mr. Skint ran into trouble and they had to leave (Divided We Fall). His full name is confirmed when he finds his birth certificate as "Buck Jebidiah Oliver" (in The Long End, Part 2). He was born on Friday, March 24th, at Hardlandville Hospital. He spent two years in Juvenile Detention after the Green Ring series.

Buck has a long history of living in lies, so he never really understood who he was, or where he came from. Several sources, including Mr. Skint and Felicia Larson fed Buck false information about who he was and what happened to his parents. His family history only became clear to him in The Long End, Part 3. His parents were in fact con artists, as well.

His father's name was Novus Ordo Oliver (Alias: Cash Oliver). Novus Ordo is a term found on the back of dollar bills, therefore Buck is likely to have been named after his father in that way. According to Detective Polehaus, Novus was a low-rent scam artist, arrested on three occasions for fraud. He had at least twelve different aliases that the police knew of. Novus died in a car crash 15 years ago, when Buck was between one and one-and-a-half years old.

In Out of the Picture it was revealed that Buck's mother died when he was young. This was confirmed, and expanded upon in the Long End. His mother's name was Dolly Tender Oliver (Alias: Stacia Bartley). After her husband, Novus died, she got cancer. Because she did not want her son to witness her dying so horribly, she entrusted Buck into the care of Jebidiah Skint. Mr. Skint, who had always loved Dolly, raised Buck for her. He claimed that he always had true affection for Buck. His mother left Buck a very large trust-fund to inherit when he turned of age. However, because most of the money was stolen, he decided not to take it. According to Felicia Larson, Buck is the spitting image of his mother.

Buck Oliver has appeared in the following albums:

Buck Oliver has appeared in the following club seasons:

Buck Oliver has appeared on the front cover of the following albums: