From AIOWiki
Jump to navigation Jump to search
#426: “The Buck Starts Here”

8a time to love and a time to hate, a time for war and a time for peace.
Ecclesiastes 3:11
11He has made everything beautiful in its time. He has also set eternity in the hearts of men; yet they cannot fathom what God has done from beginning to end.
Songs Included
[[{{{song}}}]]
Inventions Used
[[{{{invention}}}]]
Featured Charity
[[{{{charity}}}]]
Short Used
[[{{{short}}}]]
Spanish Name
{{{spanish_name}}}
Spanish Airdate
Error: Invalid time.
Soundtrack length
{{{soundtrack}}}
Previous title
“The Parable of the Entrepreneur, The Sock Shooter, and the Ditch-Digger”
Host
Chris Anthony
Written by
Marshal Younger
Directed by
Phil Lollar
Produced by
Jonathan Crowe
Phil Lollar
Executive Producer
Al Janssen
Post-Production by
Jonathan Crowe
Production Assistant
[[{{{production_assistant}}}]]
Engineered by
Jonathan Crowe
Music by
John Campbell
Songs by
Unknown
Purchase episode

You need to enable JavaScript to vote.
Blackgaard's Revenge, Part 2
The Buck Starts Here
Something Cliqued Between Us

“The Buck Starts Here” is episode #426 of the Adventures in Odyssey audio series. It was written by Marshal Younger, and originally aired on October 16, 1999.

Whit gives Jared DeWhite, Ashley, and Nathaniel Graham money to spend wisely, and they all use it in different ways. 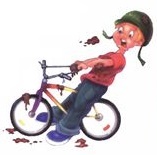 As part of an experiment Whit is conducting, he gives Jared, Ashley, and Nathaniel $25 to use constructively in the next two weeks. If they try to build on it, they can keep it. If they don't build on it, he will take it back. The kids immediately start to work on their big ideas.

Mandy Straussberg, the secretary for Nathaniel, gives him some delicious muffins that convince him they should go into the muffin business. After some discussion, Mandy agrees to make muffins to sell if she can be a 50-50 partner with Nathaniel.

Meanwhile, Ashley decides she will buy some tools and start a bike repair shop. Soon Roy Randy comes by and asks her to fix his bike right that very day. While Ashley works on the bike, Roy discovers a sock shooter on her bike. He is fascinated and asks if she can make some for him.

The next day, Whit makes some peanut butter banana ice cream and offers some to Jared. However, Jared gets suspicious that Whit is trying to tempt him to waste his money, so he refuses to buy any. Mandy then approaches Jared to tell him that Greenblatt’s Department Store has binoculars on sale. Once again, he is suspicious that Mr. Greenblatt and Whit are scheming to get his money, so he refuses to spend a penny.

Though all the kids want to spend their money constructively, they find obstacles to overcome. Nathaniel and Mandy's muffin business has too much competition, Roy gets injured when the tire Ashley fixed comes off his bike, and Jared decides to hide his money in his lunch box because he was so suspicious everyone was out to rob him.

When Whit comes back to see how everyone is doing, both Nathaniel and Ashley offer Whit's money back and tell him their struggles to make their businesses work. Though Jared felt he had successfully defended his money, Whit felt he had done nothing constructive by hoarding it, so Whit collected his money from him. Disappointed, Jared asks if it is wrong to save money, and Whit answers that it is not, but that God wants us to use all he has given us for his glory. If we do, he will give us more, but if we waste what he gives us, he will take it all away.

Mandy Straussberg: Maybe you should spend that $25 on professional therapy!

Pete: You're either the bravest girl I know or the dumbest!