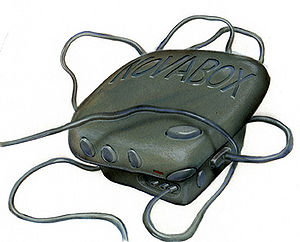 The Novabox is a dangerous device in the Novacom Saga.

The Novabox needed a satellite dish to be set up on a house to get signals from the broadcast tower. To use, the user would put on the Novabox helmet. It had an infrared port that received the remote control signals. It also had a radio transmitter in it that didn't turn off after being unplugged. The radio transmitter affected people's minds using brainwaves and caused the people of Odyssey to buy items that they didn't need or vote for someone they hadn't intended to vote for. The Novabox was part of a larger plan to influence the minds of the entire world. It also caused regression in anyone that used them and improved to the point that they were actually worse then they were before using the Novabox.

People who used the Novabox