From AIOWiki
(Redirected from Jack)
Jump to navigation Jump to search

Jack redirects here. For other uses see Jack (disambiguation). You may be looking for Jack Davis 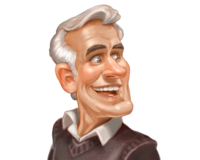 Jack Wilbur Allen is a major character in Adventures in Odyssey, voiced by Alan Young. Jack, as he is known to most AIO characters, is a quiet, kind, level-headed older man with gray eyes and standing 5' 10" tall. Jack is in a total of 89 episodes; his first episode was #280: “Gone...” in 1994 and his final episode voiced by original actor Alan Young was #725: “Home Again, Part 2” in 2012.

Jack is known for his passive nature, preferring to remain behind-the-scenes rather than take aggressive action or confront enemies. Jack loves studying, and talking about history. Little is known about Jack's immediate family other then the fact that he definitely had at least one child as he's mentioned that he's a grandparent. Jack Allen's first wife was Emily, who was not a Christian and died from a stroke. During Jack's first several seasons on the show, he was a widower; however Jack later meets Joanne Woodston in #367: “The Decision” and marries her in #374: “For Whom the Wedding Bells Toll, Part 3”. It is uncertain what Jack's child(ren) name(s) is/are, but he references having grandchildren in #296: “Red Wagons and Pink Flamingos”, #302: “Share and Share Alike”, and #526: “Seeing Red”.

In #808: “No Friend Like an Old Friend”, Jack mentions that his mother has a condition in her feet and that by middle school his father had either died or abandoned his family.

Jack was originally born in Nebraska. Jack was childhood friends with John Whittaker (Whit). As kids Jack and Whit experienced an adventure that involved treasure, bad men, and a "ghost" (#297: “Blackbeard's Treasure”). Later, Jack went to college at UCLA and worked at an auction house in Pasadena, CA. During this time, Whit attended USC. Jack dated Jenny Morrow for a time and even professed his love for her, but then he found out that Whit and Jenny were in love (#464: “The Triangle, Part 1”). Some time after this he married his first wife Emily. Then for a time he lived in Nebraska and ran an orphanage there. Soon after Whit's wife Jenny died, Jack invited Whit to visit the orphanage for a while. Jack was impressed that Whit and a girl named Clara became such good friends. He let them grow close so that they would help each other, but he didn't tell Whit that Clara was being adopted. He had to tell Whit the news when the family was there to take her. Whit was upset with him about this at the time (#365: “Clara”). Years later, Jack came to Odyssey to see Whit and found out he had gone to the Middle East. Jack ended up deciding to stay in Odyssey and helped manage Whit's End (#280: “Gone...” and #281: “...But Not Forgotten”). Once Jason Whittaker arrived in Odyssey, Jack co-managed Whit's End with Jason for a time. Jason's experimental, risky, personality tended to clash with Jack's personality every now and then. Despite their clashes the two were good friends. Jack played a prominent role during Regis Blackgaard's plot to become mayor of Odyssey. He restarted a group called the Israelites to counter the acts of vandalism that the Bones of Rath were committing. He disbanded the group when someone got hurt. During this time Jack had dreams that tended to relate to things happening around him (Album 25: Darkness Before Dawn). When Whit returned to Odyssey, Jack was hesitant to see Whit because of the happenings with Clara. Whit caught Jack at the airport just before Jack's plane would leave, and told him Jack was forgiven (#365: “Clara”). Jack remained in Odyssey, and fell in love with Joanne Woodston (#367: “The Decision”). After a time he married Joanne in September/October of 1997 and they bought an antique shop, naming it J and J Antiques. They went on a three month extended missions honeymoon to the Philippines (#374: “For Whom the Wedding Bells Toll, Part 3”). Several years later, a company called Novacom came to Odyssey. Jack and Joanne played a part in finding out what was going on with Eugene and got caught up in the chaos of it all, including a crazy taxi ride and getting held up at the post office (#484: “Plan B, Part 1: Missing in Action” - #487: “Plan B, Part 4: Resistance”). Jack served in Odyssey's Historical Society, and played a huge part in locating the town's time capsule that was buried one hundred years before (#631: “A Capsule Comes to Town”). Years after that, Jack and Joanne decided to hand off their shop to Jason so that they could travel and see more of the world (#725: “Home Again, Part 2”).

Jack's original actor Alan Young passed away in 2016. Since then, all appearances of Jack have been flashback stories of his childhood, including #789: “The Journal of John Avery Whittaker” and #808: “No Friend Like an Old Friend”.

Jack Allen has appeared in the following albums:

Jack Allen has appeared in the following club seasons:

Jack Allen has appeared on the front cover of the following albums:

Jack Allen has appeared in 89 episodes, has been voiced by 6 actors, and has received an average user rating of 92.1%.