From AIOWiki
Jump to navigation Jump to search
Knight's Scheme
Preview This Book!
{{{Preview this Book!}}} 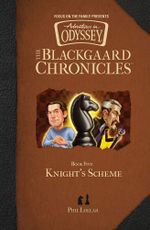 Ratings cannot be submitted until this book has been released.

The scheming Dr. Regis Blackgaard continues his fevered pursuit of the Applesauce program and access to Whit’s End. This time, on a trip to Chicago, Whit and Connie get caught up in a dangerous mystery involving a stolen laptop, the Department of Defense, and some familiar (but not very friendly) faces.

This fifth book of The Blackgaard Chronicles series introduces more of the story beyond the Adventures in Odyssey audio dramas.