From AIOWiki
Jump to navigation Jump to search
#453: “The Great Wishy Woz, Part 1”

“The Great Wishy Woz, Part 1” is episode #453 of the Adventures in Odyssey audio series. It was written and directed by John Fornof, and originally aired on October 28, 2000.

Kids' Radio features a story about a young girl named Dotty who is transported to a strange land. 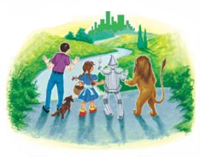 KIDS Radio presents a familiar story with a new twist. After being thrown into a new land by a tornado, Dotty and her dog Nono try their best to get back home and meet many new friends along the way, including Manny Kin (played by Tom Riley), Metal Guy (played by Bernard Walton), and Mystic Mountain Lion (played by Jack Allen). They follow the "Big Fat Road"; from Little Land to the Really, Really Green and Environmentally Correct City. There the Great Wishy Woz sends them on a quest to four items. They face dangers from the Wicked and Mean and Generally Not Very Nice Woman, rusty hinges, and even burnt fur! Will they make it back to the Wishy Woz and get their wishes granted?

Mystic Mountain Lion: And so, my question this ponder; what is truth? For truth, truly true truth, is found in the cow, in the strawberry, and the giant tooky-tooky bird. In all of us is found truth. In our left earlobe, it is found. In our bellybutton, it is found.
Metal Guy: Alright already! Can we talk about something more pleasant? Like maybe in-grown toenails?

Metal Guy: I'm looking for love. In all the wrong places, apparently.

Manny Kin: I don't have a brain in my head. See?
Dotty: Oh my, you don't?
Manny Kin: Nope. Some folks are out of their mind, but my mind is out of me.

Dotty: Thank you! (But they're really not my color...)
Fairy Oddmother: You're welcome! (Deal with it.)

Manny Kin: I guess I could have figured out a way to get my legs back on myself. But after all, I'm just a dummy!