You need to enable JavaScript to vote.
The Good, the Bad and Butch
Share and Share Alike
All the Difference in the World

“Share and Share Alike” is episode #302 of the Adventures in Odyssey audio series. It was written by Marshal Younger, and originally aired on February 18, 1995. 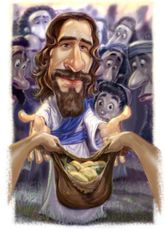 It’s Kid’s Radio’s first annual Share-a-Thon, hosted by Connie and Jack Allen. Their goal is 3,000 items — that is, 3,000 toys, items of clothing, or food to be donated to the Odyssey Shelter for the Homeless. To entertain listeners while they call in and pledge during the Share-a-Thon’s last half hour, Connie and Jack narrate three short stories about the importance of sharing.

The first is about a young girl named Jane, who is so selfish she won’t even give her little sister a ride to Whit’s End on her bike. Jane’s behavior is atrocious — until everyone else starts treating Jane the same rude way she treats them. Her mom won’t give her any food, her classmates won’t help her out in a crisis, and her father won’t even give her a ride home in his car. Jane sees the error of her ways.

Story number two is about a man named Roy who is the manager of an apartment building. The owner of the building gives Roy a great sum of money to refurbish the place. Instead of fixing things up, Roy spends the money on himself. The owner returns. He fires Roy, evicts him, and takes all of the things he bought back to the store.

Finally, the third story is about a boy named Daniel. Although he is hungry and poor, he gives up five loaves of bread and two fish to feed others — five thousand others, to be exact. The lessons on the importance of sharing are well learned. The first annual Kid’s Radio Share-a-Thon is a rousing success!

Everett Nielson: Let me ask you this: How many of you have more spaghetti strainers than you even have packages of spaghetti?! I have one word for you: give.

Jack Allen: That's another reason for sharing: because Jesus asks us to.

Roy: I'm Roy, and I need to spend some money.
Salesperson: Well, you came to the right place.
Roy: Oh, good.