This article is about the 2018 Adventures in Odyssey Club episode. For other uses, see Charlotte (disambiguation) 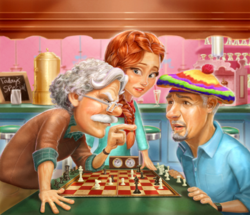 You need to enable JavaScript to vote.
Always Do Your Best-ish
Charlotte
Walk Worthy

A friendly game of chess ends abruptly when painful memories put Whit and Wilson’s friendship to the test.

Charlotte begins with Whit and Wilson playing a friendly game of chess. They describe a few plays, adding in some competitive banter here and there. During this game, Whit brings up a few old friends, causing remembering sighs from Wilson. Whit explains that it was Wilson was who made him think of these friends. Whit lists and talks about a few more before Wilson brings up “Charlie.” The mood is clearly weighted down, and Wilson hesitantly makes another chess move. Whit begins to make an apologetic sentiment, when Renee comes in, verbally perturbed. She explains that her grandmother has been sending her hats, despite Renee’s requests for her to stop. She’s brought one of these said hats with her and while Renee complains of its ugliness, Wilson says he likes it, saying he could always use another hat. Renee gives it to him as a gift. Whit continues the chess game, and Renee asks why Wilson wants more hats. Wilson tries to avoid the question, simply saying, “The sun has something against me.” “What do you mean it has something against you?” Whit asks, a concerned tone in his voice. Wilson tries to get back to the game, but Whit persists, and Wilson discloses that he had had a lesion of skin removed a few weeks ago. He admits it to be cancer but insists everything’s taken care of and he’s clean. Whit becomes offended that Wilson didn’t tell him sooner, and wins the game saying, “-still keeping things to yourself. Just like you always did.” Whit walks off in a huff, leaving Renee confused.

The second scene begins with Renee saying that Whit looked upset. Wilson agrees, and says that there’s more to it than meets the eye, as it is with Renee and her grandmother. Renee discloses that her grandmother doesn’t listen to her and calls her excessively. Wilson laughs, saying that she sounds like Charlie, his wife. He goes on to say that Charlotte was the reason Whit walked out so abruptly. Renee’s curiosity is peaked, and Wilson explains that he and Whit had some “not so pleasant run-ins” when they were kids. He goes on to tell the story of Charlotte.

Whit and Jenny had gotten married and had Jerry. Whit’s business was flourishing, and he was becoming more successful. So, when Wilson and Whit’s sister Charlotte announced that they were engaged, Whit saw it as a negative addition to his life, and from the start was irritated that Charlie hadn’t told him of she and Wilson’s relationship. He reminds Wilson of several instances where he almost got Whit and his friends “killed,” before he’s told that both Wilson and Charlie have become Christians. Wilson insists he’s changed, but Whit doesn’t want to hear it, and walks away angry, leaving Jenny to congratulate the two on their engagement.

Later, Jenny reminds Whit how terrible it felt when Charlie didn’t show up for his wedding, and he admits that he wouldn’t want to make Charlie feel that way on hers. He decides to support them in their marriage.

Wilson tells Renee how much Jenny helped with their wedding, and the next scene begins with Jenny discussing her big plans with the young couple. Charlie is hesitant, saying that her father won’t want to pay for it all, but Jenny quickly says that she and John will pay for what her father won’t. Jenny and Charlie leave, and John reassures Wilson that everything with the wedding will be alright. He also gives permission for Wilson to call him “Whit,” revealing his desire for Wilson’s friendship.

“So, you had a wonderful wedding,” acknowledges Renee, to which Wilson replies, “Nope.”

He goes on to explain that he and Charlotte eloped five months before their wedding. The couple took a short honeymoon and showed up at John and Jenny’s door to tell them the big news. Whit is furious, accusing them of wasting his wife’s time and highlighting their callousness in not telling them sooner. Charlie and Wilson try to explain, however, Whit cuts them off and won’t listening to any excuse. “No, no not this time. You don’t just get to say, ‘I’m sorry’ and everything magically gets better.” Whit walks away, despite Wilson insisting that they need to talk.

“How awful,” Renee stressed. “Yes,” Wilson replied, “We didn’t want to wait six months, we wanted to get married sooner.” “Why?” “Because of what we didn’t get the chance to tell them at their front door. That was the last time Whit and Charlie ever saw each other. Charlie had cancer…. She died two weeks later.” Wilson continues the story, telling of the next time he and Whit spoke. It was at Charlotte’s funeral, and Whit comes to join Wilson on the porch swing. They briefly discuss memories of the swing, then Whit asks why Wilson didn’t tell him. Wilson answers with, “She told me not to.”

Whit begins to complain of his closed off actions, causing Wilson to try to leave. Whit dials back and explains. “Wilson, I’ve been doing a lot of soul searching. And I realize that I haven’t been very Christ-like towards you lately. I certainly wasn’t towards Charlie. I know you’re hurting, and I don’t have the words to make things better. Charlie was my sister. And I loved her. We didn’t always get along, but I’m gonna miss her terribly. And you and I have never gotten along but I just want you to know that I’m hurting too. Deeply. For both of you.” Whit apologizes. “I’m making this about me.” “No. It’s good,” Wilson comforts. Whit asks Wilson what he will do now, and he explains his plans of being a traveling pastor. Hearing of Wilson’s low financial resources, he decides to sponsor Wilson’s journeys. Wilson is speechless. “You don’t have to say anything,” Whit wept, “You’re my brother. It’s what brothers do.”

Whit joins Wilson and Renee as the story is closing, and Renee leaves to fix a train. Whit slowly begins a conversation, shame hanging in his voice. The two make up, revealing that it is still hard even after all those years. The two end this tragedy-like episode saying, “I guess there are just some things that happen in your life that, I don’t know, you never really get over.” (Whit) “Hm.” (Wilson) “Especially when- um.” “When you didn’t get the chance to say what you wanted to say.” “Yeah. Yeah. There were so many things I wanted to tell Charlie. Good things. And I never got to. And I treated you both so badly.” “She knew you loved her.” “Yeah well um, I’m glad.” “If there’s something you want to tell her now, you can always tell me.” “Thank you, Wilson. Thank you.” “You’re my brother. It’s what brothers do.”