From AIOWiki
Jump to navigation Jump to search
Lucy Cunningham-Schultz 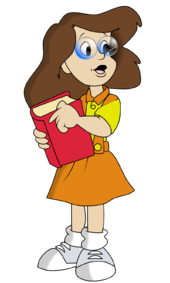 Lucy Davis (née Cunningham-Schultz) was the most recurring child character on Adventures in Odyssey, with over seventy appearances. Lucy was an ace reporter for the Odyssey Owl, her school newspaper. She worked as an intern at the Odyssey Times and was often considered to be a "goody two-shoes" and was indeed strong and sincere in her Christian beliefs. Her biggest character flaw was that she had a sarcastic streak and could also be prideful at times, though she always owned up to her mistakes. She was frequently the counterpart and moral adviser to her friends Isaac Morton, Sam Johnson, Jack Davis and Curt Stevens. She either lived on Greentree or Lynnwood. When she grew up she married Jack Davis. In #160: “A Rathbone of Contention”, she lives across town from the Electric Palace.

One of the biggest goofs surrounding Adventures in Odyssey involves Lucy's last name. With several contradictions and a tangled mess of mistaken information, the Lucy's Last Name goof is the source of plenty of confusion among fans. For more information, see the article.

Lucy's biological father, Hal Cunningham, died in a car accident when she was nine, and her mother remarried to a man whose last name was Schultz. She kept her dad's name and hyphenated her mom's name Schultz, too. She also has two cousins, Leslie and Albert. She is now married to Jack Davis.

Lucy Cunningham-Schultz has appeared in the following albums:

Lucy Cunningham-Schultz has appeared in the following club seasons: