From AIOWiki
(Redirected from Tom)
Jump to navigation Jump to search 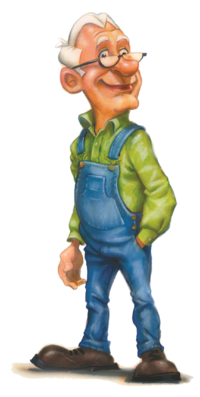 Thomas Dale Riley Jr., best known by his nickname, Tom, was a resident of Odyssey who was around from the very first Family Portraits episode, #FP01: “Whit's Visitor” until the end of the second decade. Tom was born in Marion, Indiana (or Odyssey according to Clubhouse Magazine and The Official Guide); he lived on and owned a large apple farm, which he inherited from his father. In #202: “Timmy's Cabin”, Tom learned that at least some of the apple trees on his farm were originally sown by Johnny Appleseed. Tom's roles included being the mayor of Odyssey, a little league coach and a member of various boards in the town of Odyssey. Tom never dreamed how much he would accomplish combining his small-town idealism with big-town effects.

Tom's political life expanded after his friends urged him to run for mayor (#286 – #287: “Tom for Mayor”). Unfortunately, Tom's time as mayor was plagued with troubles brought on by the Blackgaard saga. After his term expired, Tom returned to farming, but was eventually inspired by the memory of his late son Timmy to create a recreation center at his farm for kids from the inner city. Prior to his term as mayor, Tom served as a City Councilman.

Tom's second wife, Agnes Riley, was mentally ill and was last heard living at Hillingdale Haven. Tom married her after losing his first wife to cancer. He also had a son, Timmy Riley, who drowned in a boating accident before Tom remarried; he started the Timothy Center after his son died and named it in his honor. Tom was the brother of Rebecca Riley and the son of Tom Riley Sr.; he also had a great-niece, Jami Martin.

Tom was good friends with John Whittaker, Bernard Walton, and many others. Tom Riley got along well with kids and was always willing to give advice to them, if needed. Tom was never keen on technology or fancy words and, especially in the earlier seasons, was frequently at odds with Eugene on such subjects. After the debut of Bernard Walton, however, Tom and Eugene were portrayed as less-adversarial friends.

Tom did not appear in any episodes after #632: “Suspicious Finds”, the last episode featuring the (previously recorded) voice of actor Walker Edmiston. In #811: “Legacy, Part 1”, it is revealed that Tom has been dead "for years", placing the year of his death somewhere between 2008 and (at the latest) 2015.His sister Rebecca Clemmens, Whit, Connie and Eugene were listed as his beneficiaries following his death. An episode remembering Tom's death appeared in Album 68: Out of the Blue.

Tom had a family farm that has been a key location in several episodes. Besides being the location of the Timothy Center, it has also been the site where Novacom built a communications tower. The farm is located a fair distance outside Odyssey, apparent due to the fact that Whit can pick up and have a conversation with Aubrey Shepard before getting to town in #418: “Opening Day”.

Tom Riley has appeared in the following albums:

Tom Riley has appeared in the following club seasons:

Tom Riley has appeared on the front cover of the following albums:

Tom Riley has appeared on the back cover of the following albums:

Tom Riley has appeared in 140 episodes, has been voiced by 3 actors, and has received an average user rating of 0%.