A Member of the Family, Part 2

From AIOWiki
Jump to navigation Jump to search
#18: “A Member of the Family, Part 2”

11My son, do not despise the Lord's discipline and do not resent his rebuke, 12because the LORD disciplines those he loves, as a father the son he delights in.
Exodus 20:12
12"Honor your father and your mother, so that you may live long in the land the LORD your God is giving you.
Ephesians 6:4
4Fathers, do not exasperate your children; instead, bring them up in the training and instruction of the Lord.
Songs Included
[[{{{song}}}]]
Inventions Used
[[{{{invention}}}]]
Featured Charity
[[{{{charity}}}]]
Short Used
[[{{{short}}}]]
Spanish Name
{{{spanish_name}}}
Spanish Airdate
Error: Invalid time.
Soundtrack length
{{{soundtrack}}}
Previous title
“{{{name2}}}”
Host
Chris Anthony
Written by
Steve Harris
Directed by
Steve Harris
Produced by
Bob Luttrell
Steve Harris
Executive Producer
Chuck Bolte
Post-Production by
Bob Luttrell
Production Assistant
[[{{{production_assistant}}}]]
Engineered by
Bob Luttrell
Music by
Library
John Campbell
Songs by
Unknown
Purchase episode

“A Member of the Family, Part 2” is episode #18 of the Adventures in Odyssey audio series. It was written and directed by Steve Harris, and originally aired on March 19, 1988. 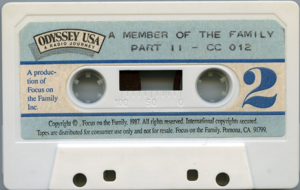 A tape of the original Odyssey USA version of this episode.

After the seemingly surprise visit from Jana, Whit tries to explain everything to her, but she refuses to listen, and the discussion quickly turns into an argument. Angry, she goes upstairs to find Monty, but he isn't there. He has run away! Jana tells Whit what has happened and they leave for the sheriff's office. When Whit and Jana arrive and try to report Monty's disappearance, he is already at the sheriff's office for breaking a window at Whit's End.

The three return to Whit's house to sort everything out. After talking to Monty, Jana and Whit send him to his room, leaving them to have a father-daughter conversation. Whit begins to explain some Whittaker family history to Jana. Whit begins to talk to her about when her brother, Jerry, died in Vietnam; they all grieved differently. Whit spent much more time Jason, his only remaining son, partly because he missed Jerry so much, and partly because Jason would soon be of draft age himself. Unintentionally, Jana was lost in the whole ordeal, and before Whit knew what happened, there was a huge emotional gap between the two of them. Whit tells her that he would like to fill that gap, and Jana agrees. For the first time in years, they both are happy — except for Monty, as he has to mow lawns in order to pay his grandfather back for the window.

Police Officer: How'd you know to come down here? We were just trying to call ya.
John Whittaker: Call me? Why?
Police Officer: Yeah, Jeff had been patrolling down by your store just now. He heard some glass breaking. He picked up a kid crawling in your back window. Says he's your grandson.
John Whittaker: Oh! Thank the Lord!
Police Officer: I wish everyone'd look that relieved when I've told them they've been vandalized.