From AIOWiki
Jump to navigation Jump to search
Problems in Plymouth
Preview This Book!
{{{Preview this Book!}}} 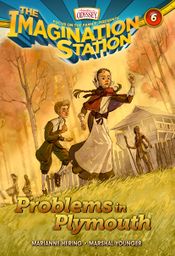 After destroying Hugh's catapult in Showdown with the Shepherd, Hugh dropped the ring in the Imagination Station. Now that they have the Whittaker family ring, all that Patrick and Beth have to do is put Albert's ring on Hugh's finger, which would send him back to his own time in 1450's England. After Mr. Whittaker's computer program tracks Hugh to 1621, Mr. Whittaker gives Patrick a bag of gold and Beth a 17th century engraved mirror, and Patrick and Beth are off. They find Hugh almost immediately, but when Indians surround them, Hugh jumps off a cliff to safety. The Indians take Patrick and Beth to their village, where they meet John Junior, a Pilgrim boy who has been lost for eight days and was eventually taken in by the Indians. The Pilgrims come to bargain for John, giving the chief a knife. Even though they don't know them, Governor Bradford gives the chief his own knife in exchange for Patrick. When Governor Bradford has nothing left to exchange for Beth, Beth hands the chief the mirror Mr. Whittaker gave her, and the chief lets her go. They head to the Pilgrim village, where they meet Captain Miles Standish. Apparently, Squanto has been kidnapped by a rival tribe and the Pilgrims are prepared to go to war. They get ready for battle, when John Junior's musket gets stolen. The cousins immediately suspect Hugh, and go in search of him. Meanwhile, the Pilgrims go to war, and shoot three innocent Indians. They discover the whole Squanto kidnapping was a hoax, and they bring the Indians to the Plymouth Plantation to doctor them up. The Pilgrims see Indian activity from a distance, and prepare to fire. An arrow hits a tree near them with deerskin tied to it that says one word, PEACE. The Indians come out, with Squanto, and say that they have honored the treaty between the Pilgrims and the tribe. They agree to have a feast, the first Thanksgiving, the next day. During the feast, gunshots go off. Patrick and Beth, now back at Plymouth, rush to the powder room. Hugh is there, with John Junior's musket. He explains that he will go back to England in his time, and with the musket he will be the most powerful in all the land. They put Albert's ring on his finger, the Station appears, and they all jump in. They get dumped out in the secret cave in England, just as Sir Andrew and his squire come in and capture Hugh, and thank the children for all their effort. Their job is done, and the Station appears to take them home. Back at Whit's End, they give Mr. Whittaker back his family ring. He thanks them for all they've done for him and his family, and tells them they are done.They ask him if they can go on any more adventures and he tells them to come back tomorrow.