From AIOWiki
Jump to navigation Jump to search
Voyage with the Vikings
Preview This Book!
Here 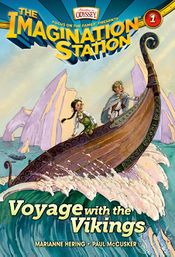 Beth and her cousin Patrick go to Whit's End to try out the Imagination Station, however to their dismay it's not working and Whit has it in the workshop for repairs. However then Beth and Patrick get in to look at it the station starts to work again, since it's working Whit says they can go on an adventure, but asks them to do him a favor, find out what a Viking sunstone is.

Beth and Patrick land in the adventure in a boat at sea, with no way to get to shore, but thanks to a wave from some falling ice they make it to shore. While exploring the shore they are almost trampled by reindeer being chased by Red and Lief Erikson. Red wants to keep the kids as slaves, Lief disagrees with this and wants to keep them under his own care and supervision.

Back at the Viking village Leif leaves the children in a church saying they are safe their as his father will never enter it. After Leif leaves Patrick decides to go out on his own and search for the sunstone. He ends up on another Viking ship looking through boxes for it when someone accuses him of stealing the cape that he's wearing. He's brought as a prisoner before Leif, who vouches for him and the fact that the cape really is his. He brings Patrick back to the church where he'll be safe, but when they get there Beth is no where to be found. Leif and Patrick eventually find Beth sitting next to Red and Hilda (Hilda is Red's wife) while Red plays chess against fellow Vikings.