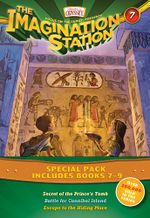 Secret of the Prince's Tomb

The hot sun and sand of ancient Egypt await Patrick and Beth in their next Imagination Station adventure. The cousins are caught between a terrible ruler and a nation bound for slavery. To help their new friend Tabitha, the cousins must seek out a great secret-one that will give hope to her family and future generations. Their search takes them to an ancient burial vault and... a mummy! But the vault is a confusing maze, filled with traps and mysterious symbols. Will the cousins ever get out again to share a life-changing hope?

Patrick and Beth are hurled into the South Pacific during the 1840s and take part in a breathtaking search for the mysterious Starlight Island. The cousins join the clever Scottish pirate hunter Captain Connor Glenn and the crew of the flagship Saint Andrew’s Lance as they hunt the infamous pirate Captain Tobias Dredd. Their search leads them to the emerald-green islands of Fiji, where they attempt to rescue missionary William Cross. But Captain Dredd’s forces attack the island, and Patrick and Cross are kidnapped. Beth and Captain Glenn must save them, but it’s a race against time. And the only hopes they have of finding the Starlight Island rest in their trust in God and a broken telescope that just might reveal more than meets the eye.

Escape to the Hiding Place

Join cousins Beth and Patrick as they arrive in World War II era Holland. They must smuggle a baby by bicycle into the capable hands of Corrie ten Boom at her home in Haarlem. Along the way they hide from Nazi soldiers, meet a Russian surgeon forced into service by the Germans, and encourage two Jewish children who haven't been outside in over three years. The children learn to appreciate the bravery and sacrifice of everyday people who helped the Jews.