Freedom at the Falls

From AIOWiki
Jump to navigation Jump to search
Freedom at the Falls
Preview This Book!
Here 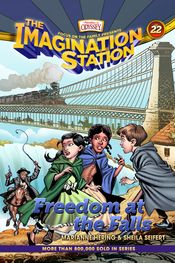 When they step into the Imagination Station, kids experience an unforgettable journey filled with action-packed adventure to inspire their imaginations. With each book, they’re whisked away with cousins Patrick and Beth to embark on a new journey around the world and back in time.

In Freedom at the Falls, the Imagination Station takes Patrick and Beth to 1860s America, the time of the Civil War. There they meet key historical figures of the period and help conduct escaping slaves along the Underground Railroad to freedom in Canada. This is the first in a three-part story arc focusing on Civil War America.