From AIOWiki
Jump to navigation Jump to search
The Risky Reunion
Preview This Book!
{{{Preview this Book!}}} 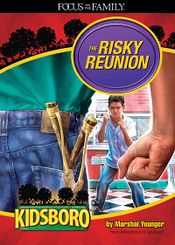 The Kidsboro City Council is under attack from all angles:

Ryan Cummings thinks it's all kind of funny...that is, until the "Girls Against Discrimination" (GAD) walk through the door. The group is led by the very powerful Valerie Swanson, who will stop at nothing to get better jobs for females. Suddenly, with his approval ratings slipping, Ryan has to decide which groups to support. But will that set up a virtual war zone in Kidsboro?