From AIOWiki
Jump to navigation Jump to search
Compilation 01: Strange Journey Back
Preview This Book!
Here 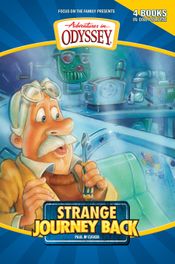 Mark Prescott is the new kid in Odyssey - and he doesn't want to be there. His parents have split up, and the only one who wants to be his friend is an annoying girl. But not everything's bad. There's an amazing ice cream shop called Whit's End, and its owner is a quirky inventor named John Avery Whittaker who seems to create fun and adventure for the whole town. As Mark gets drawn into life in Odyssey, the lessons he learns will change his life.

This compilation includes the following books: