From AIOWiki
Jump to navigation Jump to search
Revenge of the Red Knight
Preview This Book!
{{{Preview this Book!}}} 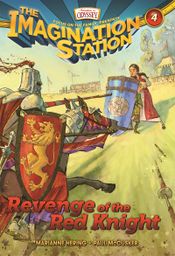