Swept into the Sea

From AIOWiki
Jump to navigation Jump to search
Swept into the Sea
Preview This Book!
{{{Preview this Book!}}} 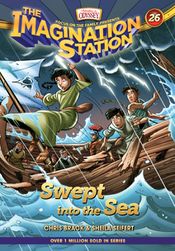 When kids step into the Imagination Station, they experience an unforgettable journey filled with action-packed adventure and excitement. Patrick and Beth travel back in time in the Imagination Station to a grain ship in the Mediterranean Sea during the first century. A violent storm has been raging for fourteen days, and the ship is in danger of crashing into the African coastline or breaking up due to the crashing waves. On the ship, the cousins meet Paul, a prisoner on his way to Rome for trial, and his traveling companions. Paul tells everyone that God has told him that everyone on the ship will be saved . . . if they stick together. But the passengers are forced to abandon the ship and swim for shore when the ship runs aground. Will God’s promise come true?