Trouble on the Orphan Train

From AIOWiki
Jump to navigation Jump to search
Trouble on the Orphan Train
Preview This Book!
Here 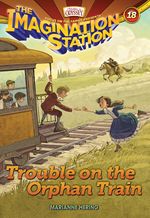 Patrick and Beth arrive on an orphan train, heading west. They befriend an orphan who is falsely accused of being part of a train robbery. No one will adopt the child. Patrick and Beth stay with their new friend until the end of the line. All the while, they search for Eugene, who is missing somewhere in time.