Escape to the Hiding Place

From AIOWiki
Jump to navigation Jump to search
Escape to the Hiding Place
Preview This Book!
{{{Preview this Book!}}} 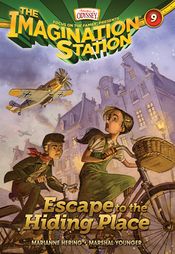 Join cousins Beth and Patrick as they arrive in World War II era Holland. They must smuggle a baby by bicycle into the capable hands of Corrie ten Boom at her home in Haarlem. Along the way they hide from Nazi soldiers, meet a Russian surgeon forced into service by the Germans, and encourage two Jewish children who haven't been outside in over three years. The children learn to appreciate the bravery and sacrifice of everyday people who helped the Jews.