From AIOWiki
Jump to navigation Jump to search
Inferno in Tokyo
Preview This Book!
Here 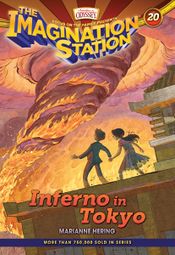 The Imagination Station has been malfunctioning for several adventures now, handing out the wrong gifts and traveling unexpected paths. Patrick and Beth must use their courage, strength, and resilience to help others and survive dangers as they travel through time and space and get caught up in the 1923 earthquake, tsunami, and fire that devastated Tokyo, Japan.