From AIOWiki
Jump to navigation Jump to search
Battle for Cannibal Island
Preview This Book!
{{{Preview this Book!}}} 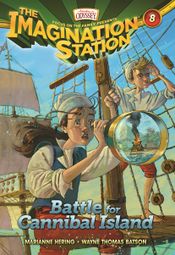 Patrick and Beth are hurled into the South Pacific during the 1840s and take part in a breathtaking search for the mysterious Starlight Island. The cousins join the clever Scottish pirate hunter Captain Connor Glenn and the crew of the flagship Saint Andrew’s Lance as they hunt the infamous pirate Captain Tobias Dredd. Their search leads them to the emerald-green islands of Fiji, where they attempt to rescue missionary William Cross. But Captain Dredd’s forces attack the island, and Patrick and Cross are kidnapped. Beth and Captain Glenn must save them, but it’s a race against time. And the only hopes they have of finding the Starlight Island rest in their trust in God and a broken telescope that just might reveal more than meets the eye.