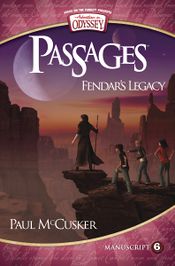 In the summer of 1968, three children, two boys and a girl, fall into Trickle Lake, but they surface in a fountain in the great city of Muirk in Palatia. The two boys and their cousin Michelle are chased by the authorities, and Michelle is captured and taken to the king. The brothers, Danny and Wayne, are made slaves by a businessman before being freed by a man named Fendar. The three children play a prophetic role in the deliverance of the Marutians, though working from different sides! Michelle helps the King of Palatia while the brothers help Fendar and the Marutians. With amazing twists on an old story, this final book in the Passages series ties in all the others and brings the series to an awesome conclusion.

The story of Moses, the plauges on Eygypt, and the Exodus.