The Case of the Mysterious Message

From AIOWiki
Jump to navigation Jump to search
The Case of the Mysterious Message
Preview This Book!
{{{Preview this Book!}}} 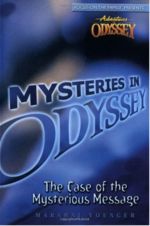 Cal Jordan has an accident on his bike and discovers an old bag of mail with a love letter to a woman named Rebecca in it. The letter, and another in the bag, seem to indicate that the man who wrote the letter was involved in something illegal. Eugene and Cal team up against Connie and Sarah Prachett. The girls are determined to prove the man who wrote the letter wasn't a criminal...while the boys are sure he is. Against their better judgment, Connie and Eugene dive into the case, and long-held secrets entangle the foursome in real live danger. It may force Cal to reveal a secret of his own. Can patience and forgiveness save them this time?