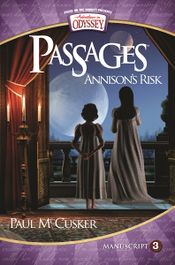 "This was supposed to be a fairy tale, but it's turning into a nightmare!"

Squeezing farther beneath the musty porch of her house, Maddy Nicholaivitch is sure she's found the perfect hiding place. But as she inches closer to a strange glow of light, her senses reel when she finds she has just passed into an utterly differently place and time! Gone is her familiar town of Odyssey!

In this exciting land, a conquering king is ascending the throne. And he's about to marry a Princess that Maddy has seen before in her dreams. The princess, along with the captain of the guards, are secret followers of the "Old Faith" in the Unseen One.

But in the name of loyalty, the king's most trusted adviser has hatched an evil plan to stamp out the "Old Faith" forever. Can Maddy help save a kingdom from the tyranny of a wicked man? Or will she pay the price for her own growing belief in the Unseen One with her very life?

The story of Esther.