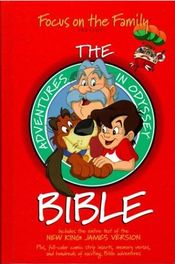 This New King James Version of the Adventures in Odyssey Bible was released in 2000, by Tommy Nelson.