From AIOWiki
Jump to navigation Jump to search
Showdown with the Shepherd
Preview This Book!
Here 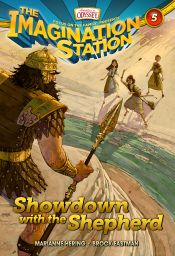