From AIOWiki
Jump to navigation Jump to search
The Marus Manuscripts: Volume 2
Preview This Book!
{{{Preview this Book!}}} 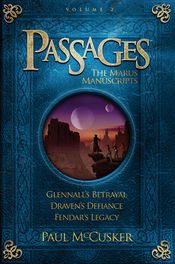 "Glennall’s Betrayal": In Depression-era Odyssey, James Curtis runs away from home and joins a mysterious group of gypsies. Along the way, he is kidnapped and sold into slavery, where he meets a young man named Glennall. Together, James and Glennall journey to the capital in Marus and discover that there is a higher purpose to the random events of their lives. Based on the biblical story of Joseph, Glennall’s Betrayal models for the reader what it means to trust God in every circumstance and to forgive those who have wronged us. Any fan of Tolkien will appreciate this fantasy story, and with a new cover and interior graphics, it’s better than ever!

"Draven’s Defiance": While running through an old railroad tunnel, Scott Graham bumps his head, and suddenly finds himself in another world where time has stopped and he is expected to fulfill a purpose he knows nothing about—set for him by the Unseen One. In a wartime period resembling Nazi Germany, Scott must learn from a daring prophet and take a stand that will affect an entire nation—and his very life. Based on the biblical story of Elijah, Draven’s Defiance retells the story from a kid’s perspective, helping kids understand the themes and principles in God’s Word.

"Fendar’s Legacy": Danny, Michelle, and Wayne jump into a river and come out of the water to find themselves in a fountain in another land. When these three young travelers unexpectedly journey from Odyssey to Marus, two of them join forces with an exiled prince to free an oppressed people, while the other is enticed by the kingdom’s riches. Will the epic struggle lead to a terrible parting? Based on the biblical story of Moses, and written from a kid’s perspective, Fendar’s Legacy teaches about the freedom found in following God’s plan.