Young Whit and the Traitor's Treasure

From AIOWiki
Jump to navigation Jump to search
Young Whit and the Traitor's Treasure
Preview This Book!
{{{Preview this Book!}}} 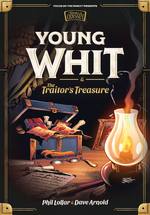 Nine-year-old Johnny and his family just moved to the small town of Provenance, North Carolina. It's the 1930s. Adjusting to a new town, new school and new friends is hard enough, but Johnny also faces a decades-old scandal that has tarnished his family's reputation. Find out if he can restore honor to the Whittaker name . . . and solve a mystery involving a musty old trunk.