The Rise and Fall of the Kidsborian Empire

From AIOWiki
Jump to navigation Jump to search
The Rise and Fall of the Kidsborian Empire
Preview This Book!
{{{Preview this Book!}}} 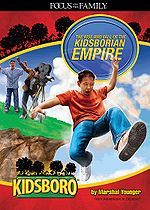 Business is booming lately in Kidsboro. Nelson Swanson's remote-controlled cars are selling like hotcakes, there's a new 9-hole mini golf course in town, and a movie theater just opened. But it all comes to a halt when one store owner sues another... and hard times hit Kidsboro. Even Pete, the local filmmaker, is losing money and friends after his actors go on strike. To survive this slump, can the kids-only community work together?