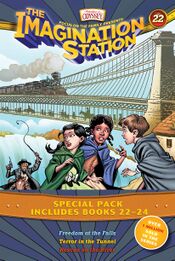 Freedom at the Falls

When they step into the Imagination Station, kids experience an unforgettable journey filled with action-packed adventure to inspire their imaginations. With each book, they’re whisked away with cousins Patrick and Beth to embark on a new journey around the world and back in time.

In Freedom at the Falls, the Imagination Station takes Patrick and Beth to 1860s America, the time of the Civil War. There they meet key historical figures of the period and help conduct escaping slaves along the Underground Railroad to freedom in Canada. This is the first in a three-part story arc focusing on Civil War America.

Terror in the Tunnel

Book 23 in the highly successful Imagination Station series finds cousins Beth and Patrick nearing Washington, D.C., on the train with Abraham Lincoln, heading to his first inauguration. But a band of assassins plan to meet Lincoln in Baltimore and end his presidency before it starts. Can the cousins help get him through the city safely and on to his big history-making day?

Rescue on the River

In Rescue on the River, the third book in a three-part story arc focusing on Civil War America, cousins Patrick and Beth attend Abraham Lincoln’s inauguration and discover that their friend’s brother Kitch is a slave in South Carolina. The cousins search for Kitch as they travel down the Combahee River with Harriet Tubman. They help with the secret mission of the Second South Carolina Volunteers, an African American unit. Will they be able to find and rescue Kitch?