Poison at the Pump

From AIOWiki
Jump to navigation Jump to search
Poison at the Pump
Preview This Book!
Here 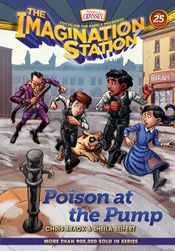 In Poison at the Pump, Patrick and Beth travel back in time in the Imagination Station to London, England, during the cholera epidemic of 1854. The cousins join Dr. John Snow, Florence Nightingale, and Curate Henry Whitehead in a thrilling scientific adventure to discover why this disease was killing people around Broad Street. In their quest for truth, Patrick finds himself a prisoner in a workhouse. Will he escape? Can the cousins help Curate Whitehead put together the clues to keep this deadly disease from spreading?