From AIOWiki
Jump to navigation Jump to search
The Great Kidsboro Takeover
Preview This Book!
{{{Preview this Book!}}} 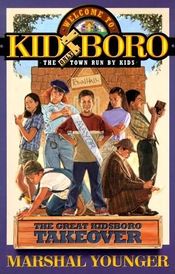 Welcome to Kidsboro. It has a church, a police station, a store, a bakery, a weekly newspaper, even a jail. The citizens are all under 14 years of age. The ramshackle town sits in the woods behind the house of founder Ryan Cummings, 12. It started as a school project, then took on a life of its own. The population has mushroomed from 5 to 29. Kidsboro has a chief of police, lawyers, a newspaper reporter, an insurance man, and one perplexed mayor. That's Ryan.

He may not be a mayor for long. Valerie Swanson wants to change the rules. "If I don't get what I want," she says, I'm gonna take over this town and run you out." The peace of Kidsboro is about to be disturbed.