From AIOWiki
Jump to navigation Jump to search
The Creek War
Preview This Book!
{{{Preview this Book!}}} 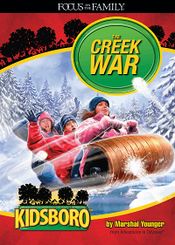 Max is the richest and most powerful kid in town, but his antics get him kicked out of Kidsboro. In revenge, he creates his own town across the creek and names it Bettertown. And it really does appear better — it has more attractions, tastier food, and more exciting entertainment. Soon, several Kidsboro citizens have left for greener pastures. But even though Bettertown appears to live up to its name, there are secrets that pit it against Kidsboro in an epic battle — complete with snowballs and a menacing catapult.