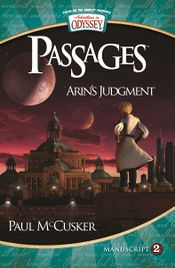 One minute, Wade Mullens is in Odyssey - attempting to burn his top-secret drawings for the atomic bomb. The next, he's staring at a person from a time period centuries before who says Wade is the final sign - an end-times omen of a culture on the verge of annihilation. But a power-mad tyrant sees opportunity in the young man's bomb-making skill. Can Wade stop the reign of terror that a madman's bomb will surely bring to Marus?

Jack Allen and Whit are searching for more of the old school notebooks that contain the stories of children in Marus. They head to Maude McCutcheon's estate, where the first notebook was found. After a while of looking around, they're about to give up, when Jack spies something on a shelf in Mrs. McCutcheon's study. It's an old school notebook. Hardly daring to believe, Jack opens the front cover and sees: " September 18, 1945" and "The Chronicle of the Destroyed". Also there are some newspaper clippings from shortly after World War II stating that Odyssey had a major flu epidemic. They begin to read. Wade Mullens was a typical boy in 1945. His dad, though, has been lost somewhere in the Pacific for several months while serving his country. Wade's friend asks him to come over to his house after school one day. He shuts the door to his room and pulls some papers out from under his bed. They are the crude sketches of an atomic bomb. Wade is aghast. How did his friend get these? His friend tells him his uncle is a scientist working on the Manhattan Project, and his cousin found these laying on his uncle's desk, thought he'd like them, so he sent them to his home in Odyssey. His friend's mother comes home and asks what they are doing. Before she makes it up the stairs, his friend shoves the drawings down Wade's shirt. Things don't go according to plan when his friend's mother feels Wade's head and send him home saying he's running a fever. When Wade gets home, his mother asks him to go down and put coal in the furnace. By now Wade is very sick, but he does what he's told. When putting coal in, he begins to feel really hot and feverish. He sees a white light begin to grow stronger and stronger. He falls into a faint, as the light consumes him. He wakes up with an old man with different colored eyes looking over him.He says that Wade is a sign that the civilization they live in will shortly end by way of some terrible disaster. Wade does not no what he means. The man explains his name is Arin, and he is the prophet of the Unseen One, or God. The Unseen One told him sixty years ago to build a shelter to protect him, his family, and the animals. Wade does not heed his warnings to stay in his compound, and goes out to see the city. He gets kidnapped by two thugs who take him to the elders of Marus. They do not believe what he says about his world, so the leader, Liven, tells the thugs to take him away. They take him to Tyran, a man that is considered to be a rebel by the elders, who paid the thugs a nice sum to bring Wade to him. Tyran wants to know about the atomic bomb plans, and flatters Wade to get them. He takes Wade to a longtime friend of his: Dr. Lyst. The doctor tells Wade to tell him everything he can about the atomic bombs, gunpowder, TNT, and other forms of warfare,[the most powerful weapon they had in their culture was solar bombs, which was mostly a big firework], and he would do everything in his power to get Wade home. Behind the scenes, Tyran tells Dr. Lyst he has just a few days to get an atomic bomb prototype ready to test on Liven's house. Dr. Lyst objects, but Tyran tells him that this is their life goal. Tyran tries to get the elders to comply with his demands, but they refuse, and Liven's house gets blown up, with a maid in it. Dr. Lyst is aghast that Tyran would kill a human being and refuses to work on the project anymore, but Tyran forces him to. Tyran is now the official leader of a united Marus now, and is quickly proved to be a very cruel dictator, proven by the attempts to wipe out Arin. Reports of a strange disease that is killing people escalates into a worldwide epidemic. Wade gets locked in a tower, believing he is the cause of it. About a week later, a very thin, pale, and sick Dr. Lyst unlocks Wade and takes him to his laboratory. He tells him that he recorded the symptoms of people and himself and they match the symptoms of Wade's strange "flu". When Wade says that this is impossible because it is just a little disease in his world, Dr. Lyst explains that in a world where something like this hasn't existed, it is fatal and highly contagious. Dr. Lyst blows up Tyran's castle, while Wade rushes back to Arin's shelter. It is closed up. Wade panics and in doing so, a bout of flu comes on, and he passes out. Arin and his family drag him inside, where Arin tells him that the Unseen One has protected him and his family so the human race could start over again. Wade sees the flash of light and finds himself in bed with his mom crying. His mom says while he was passed out she received a letter from the Army saying that her father has survived and is coming home.

The story of Noah and the flood.