From AIOWiki
Jump to navigation Jump to search
Madman in Manhattan
Preview This Book!
Here 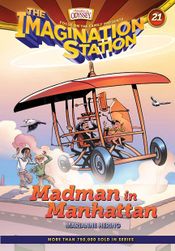 The adventure continues as Patrick and Beth end up in New York City in 1928 as inventor Nikola Tesla is embroiled in a patent conflict with fellow inventor Thomas Edison.