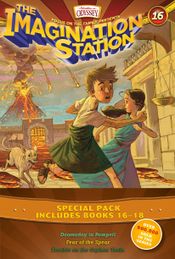 It’s the hottest adventure yet! When Patrick takes a trip alone in the Imagination Station for science project research, things get a little explosive. First, his cousin Beth gets angry that she was left behind. Second, Eugene Meltsner sees red when he realizes that Patrick went to Pompeii in 79 A.D. a day before Mount Vesuvius erupts! It doesn’t help that the Imagination Station is on the blink and Whit has gone missing. As Beth and Eugene frantically try to find a way fix the machine, Patrick learns a few things about volcanoes: it’s not the lava that comes first, it’s poisonous gas. Will Eugene be able to reprogram the Imagination Station and send Beth to help Patrick? And what will happen to Patrick’s new friends—a preacher, a looter, and a stray dog? Find out in the next adventure, Doomsday in Pompeii!

In Fear of the Spear

Patrick and Beth have escaped from volcano lava only to be separated again, and no one knows exactly where Beth has gone. Eugene and Patrick frantically try to fix the Imagination Station so they can find Beth, who unbeknownst to them has landed in the Amazon jungle. Will Patrick find Beth? Will Eugene be able to fix the broken Imagination Station? What will happen to the strange man with the spear in his side? Find out in the latest Imagination Station adventure!

Trouble on the Orphan Train

Patrick and Beth arrive on an orphan train, heading west. They befriend an orphan who is falsely accused of being part of a train robbery. No one will adopt the child. Patrick and Beth stay with their new friend until the end of the line. All the while, they search for Eugene, who is missing somewhere in time.