Challenge on the Hill of Fire

From AIOWiki
Jump to navigation Jump to search
Challenge on the Hill of Fire
Preview This Book!
Here 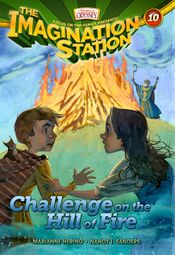 Kidnapped by Celtic Druids in 433, Patrick and Beth are headed to certain death when followers of a former Irish Slave (Saint Patrick, called Patritius in this book) save them. The cousins find themselves in the midst of a power struggle between Ireland’s King Logaire, Patritius, and the leader of the Druids, Lochru. A spiritual showdown begins on the Hill of Slane when Patritius builds a fire, challenging the King’s authority. Will Patritius prove to the king that the God of the Bible is the true God? Or will the king take sides with the Druids? The Emerald Isle holds many tales and legends, but this story of truth and standing strong for God is not one to be missed.