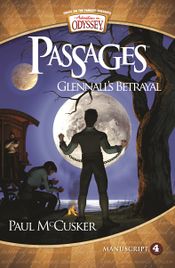 "During a desperate attempt to run away from home, James Curtis is transported to Marus and meets Glennall, a young man who was made a slave by his own family but now has the chance to rise to great power-and seek revenge."

During his desperate attempt to run away from home, James Curtis is startled when he encounters a wandering band of gypsies in a battered wagon! Needing a ride, he recklessly accepts an offer to join them - and soon finds he is no longer in the familiar place and time he just came from,

James's confusion turns to terror when he witnesses a young man being attacked and thrown down a mineshaft! Seeking to help the poor victim, James is instantly entangled in a dark family feud that leaves him bound, gagged, and at the mercy of brutal strangers!

A prisoner in an exotic land full of unknown dangers and suspicious people, James desperately searches for an escape. The future seems hopeless. Will he be sentenced to a life of slavery? Or is there some higher purpose to this deadly predicament.

The story of Joseph.