A Carnival of Secrets

From AIOWiki
Jump to navigation Jump to search
A Carnival of Secrets
Preview This Book!
{{{Preview this Book!}}} 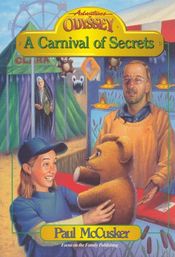 Patti Eldridge has been depressed ever since her best friend Mark Prescott moved away. So when the spring carnival comes to Odyssey, Patti's parents are sure they've found just the thing to cheer her. But when the rides don't appeal to her and the hall of mirrors seems dull, Patti wanders off...and into Madam Clara's fortune-telling tent. She's certain her mother and father wouldn't approve, but what harm could it do? After all, she doesn't have to believe a thing the woman tells her, right?

Patti wins a prize at the shooting gallery just as Madam Clara said she would. But then bizarre things start happening - like the fortune-teller showing up at Whit's End and the brakes on her parents' car mysteriously going out.