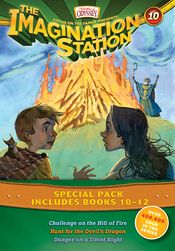 Challenge on the Hill of Fire

Kidnapped by Celtic Druids in 433, Patrick and Beth are headed to certain death when followers of a former Irish Slave (Saint Patrick, called Patritius in this book) save them. The cousins find themselves in the midst of a power struggle between Ireland’s King Logaire, Patritius, and the leader of the Druids, Lochru. A spiritual showdown begins on the Hill of Slane when Patritius builds a fire, challenging the King’s authority. Will Patritius prove to the king that the God of the Bible is the true God? Or will the king take sides with the Druids? The Emerald Isle holds many tales and legends, but this story of truth and standing strong for God is not one to be missed.

Hunt for the Devil's Dragon

Join cousins Beth and Patrick as they are whisked away for Libya in the 13th century. The town of Silene is being terrorized by a vicious animal that is eating livestock, and the townspeople believe it's a dragon sent by the devil. To appease the beast, the people believe they must offer up a human sacrifice---a young girl named Sabra. When Beth tries to help Sabra escape, she too is tied up as an offering for the dragon. Meanwhile, Patrick and a new friend named Hazi join Georgius, a Roman knight who is serving in Africa to keep peace. Georgius decides to find the dragon and kill it, but his plans go awry when Beth and Sabra beg him not to kill it. The girls know the true secret of Silene---and the dragon isn't its worst enemy.

Danger on a Silent Night

Beth and Patrick travel to the Holy Land. Patrick joins the wise men as they travel toward Jerusalem. Beth winds up at Herod’s palace and sees the king’s reaction when he finds out about the newly born King of the Jews. The cousins meet up at the palace. Devout Simeon tells them where they can find the baby Jesus. Beth and Patrick set out with the wise men only to discover they’ve been followed by one of Herod’s soldiers. Knowing that death is in store for the Baby Jesus if the soldier finds Him, Beth and Patrick carry out a plan to keep the baby safe.