From AIOWiki
Jump to navigation Jump to search
Fionna Donneral 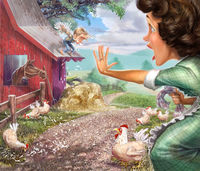 Fiona Donneral is Whit's step-mother, marrying his father Harold Whittaker. She is heard from in #49: “Thank You, God” and then flashbacked in later retrospective episodes.

Fionna Donneral has appeared in 7 episodes, has been voiced by 2 actors, and has received an average user rating of 90.3%.
Retrieved from "https://www.aiowiki.com/w/index.php?title=Fionna_Donneral&oldid=260690"
Categories:
Hidden categories: