From AIOWiki
Jump to navigation Jump to search
Ryan Cummings 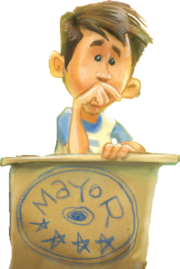 Ryan is the mayor of Kidsboro and the former captain of the Odyssey Middle School basketball team. He is about age 12-14 according to the Kidsboro books. He is also the de facto leader of the The Square One Club. He appears to be a transitional character appearing solely in Kidsboro through the Truth Chronicles before finally appearing in regular album episodes.

Ryan used to live in California with his mother and his father under the name of Jim Bowers. But when his father became an alcoholic, Ryan, eight years old at the time, and his mother left his dad in the middle of the night after experiencing abuse from Mr. Bowers. They went to an abuse shelter that set them up with a new name and life in Odyssey.

He is a soldier for the Kidsboro Military. He was also a soldier involved in Operation: Save Marcy