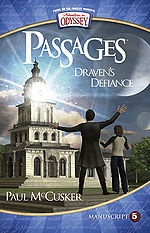 Whit and Jack Allen get a real surprise in this book, they read a Manuscript written by Scott Graham who disappeared from Odyssey in 1979. He tells how he found himself in a VERY strange place, where time stands still. All Time has been stopped by one man, Draven, the Voice of the Unseen One, in defiance of the rulers of Marus. Scott journeys with Draven and learns of the consequences when man tries to run the world without God. Will Scott answer the call of the Unseen One? Will time be restarted, so food can grow, people can be born and die, and the sun finally move after 3 years in the same spot in the sky? Don’t miss this powerful tale of Commitment and self-sacrifice.

The story of Elijah, King Ahab, and Queen Jezebel, what happened on Mount Caramel and the story of Naboth's Vineyard.